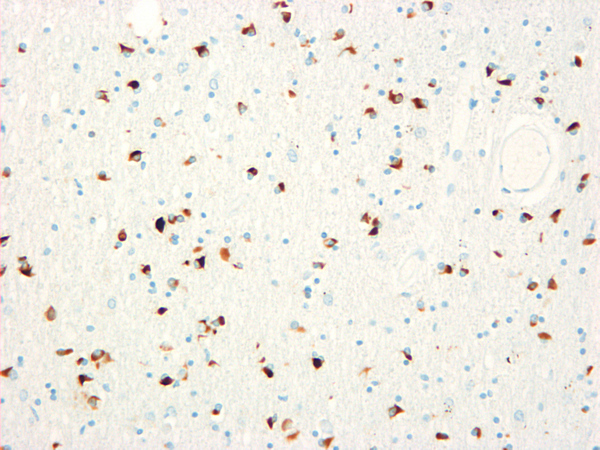 Pathological deposits of aggregated α-synuclein (glial cytoplasmic inclusions, stained in brown) in the brain of a patient affected by MSACommon neurodegenerative diseases are characterized by protein aggregation.

A key hallmark of synucleinopathies such as Parkinson´s disease (PD) and Multiple System Atrophy (MSA) is the formation of misfolded and aggregated α-synuclein deposits. Recent research has demonstrated that aggregated α-synuclein causes neurotoxic effects and contributes to disease progression as well as the spread of pathology within the brain. Small pathological aggregate species (oligomers) of α-synuclein have been shown to be the most relevant neurotoxic species to trigger disease.

Parkinson's disease (PD) is one of the most common diseases of the central nervous system. It is usually diagnosed between the ages of 50 and 79, with increasing incidences at an advanced age; men are affected more often than women. Drugs and supportive therapies can alleviate motor symptoms, but to date, there is no cure for PD.

PD belongs to the group of synucleinopathies, diseases that are characterized by the abnormal deposition of the α-synuclein protein in the central and peripheral nervous system. In PD, α-synuclein accumulates predominantly in neurons, resulting in the formation of so-called Lewy bodies and Lewy neurites, which can be detected microscopically in neuropathological examinations.

The typical motor symptoms that afflict PD patients include tremors, muscle stiffness and slowness of movements. They are mainly caused by a lack of the neurotransmitter, dopamine, which is produced by certain nerve cells in the midbrain. In PD, the dopamine-producing nerve cells in the substantia nigra exhibit pronounced synuclein deposits.

Multiple System Atrophy (MSA) is a rare neurodegenerative disorder that belongs to the group of synucleinopathies and is also classified as an “atypical parkinsonism” disorder. Pathologically, MSA is characterized by abnormal deposits of the α-synuclein protein mainly in oligodendroglial cells and also in certain nerve cells. Typically, there is a dysfunction of the autonomic nervous system, i.e. disturbances of bladder function, erectile function, intestinal mobility, or the regulation of blood pressure and body temperature. Often, additional PD-like symptoms, such as slowness of movement and stiffness of the muscles, or a disturbance of cerebellar function with a progressive loss of balance or speech problems are experienced by the patient. Cognitive impairments (disturbances in thinking and memory), on the other hand, are relatively rare. In contrast to PD, the most common synucleinopathy, the symptoms are usually symmetrical and progress faster. Depending on the symptomatology, a distinction is made between MSA-P (parkinsonian-type MSA) with predominantly PD-like symptoms and MSA-C (cerebellar type MSA) with predominantly cerebellar dysfunction. The two clinical manifestations, MSA-P and MSA-C, occur in a 3:2 ratio.

Approx. 4-5 out of 100,000 people suffer from MSA. The mean age of onset of the disease is in the sixth decade of life. Men and women are affected approximately equally and do not differ in the clinical course of the disease. So far, there is no cure and no specific drug treatment for MSA. The mean survival period after diagnosis is six to ten years.

Diagnosis is largely based on clinical examinations as well as imaging techniques. In brain imaging (cMRI, cCT), structural changes in the cerebellum, brain stem or basal ganglia can be present. In contrast to many other neurodegenerative diseases MSA has a few clearly defined hallmarks that support clinical evaluation and help to provide a clearer diagnosis for patients.

Further information can also be found on the website of the "International Parkinson and Movement Disorders Society" (www.movementdisorders.org).