Certain proteins including α-synuclein can form disease-specific fibrillar amyloid aggregates. The misfolding/aggregation pathway resulting in amyloid fibrils involves characteristic oligomer species which have been shown to be the most relevant toxic protein species. These pathological oligomers exhibit structural epitopes that are not found in physiologically folded proteins or physiological protein assemblies, providing a specific structural target for anle138b, our lead candidate.

Anle138b, is a small molecule compound that specifically binds toxic oligomeric structures of alpha-synuclein, the core aggregating protein in Parkinsonian disorders. Through the binding, anle138b dissolves toxic oligomers and prevents new oligomers from forming, addressing the diseases at the core. Pre-clinical animal model studies in Parkinson’s disease and MSA have demonstrated the ability to halt disease progression and alleviate symptoms in vivo, effectively preventing further damage by stopping the accumulation of pathological protein aggregates in the brain. In contrast to antibodies, anle138b can be administered orally, efficiently passes the blood-brain-barrier, and directly targets toxic intracellular α-synuclein oligomers where they are formed. 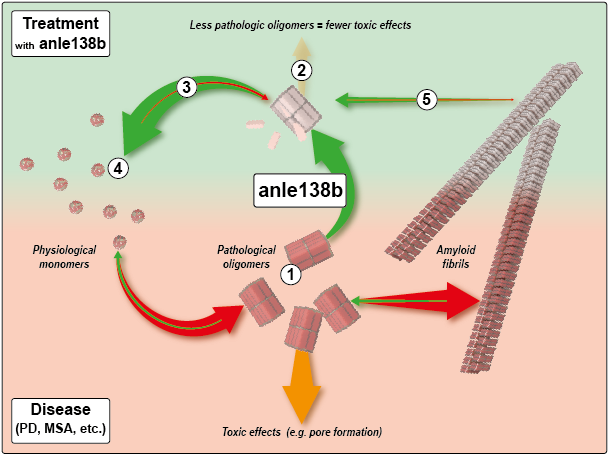 1.  Anle138b binds to a structural epitope specific for pathological disease-related oligomers with nanomolar affinity. The specific binding has been shown using NMR, binding-dependent fluorescence, and tritiated anle138b. Molecular dynamic calculations were used to obtain an atomic resolution structural characterization of the binding site.

2.  Binding of anle138b to pathological oligomers alters the structure of these oligomers and inhibits their neurotoxic properties such as pathological pore formation in cellular membranes.

3. As binding of anle138b interferes with the stability of pathological oligomer structures, it causes a modulation of toxic oligomers towards smaller, non-toxic oligomers and monomers. As the misfolded state is essentially stabilized by protein-protein interactions within the aggregate, the monomer resumes a physiological conformation.

4.  Importantly, anle138b does not bind to the monomer and therefore does not interfere with the physiological function of the monomer.

5. As anle138b depletes pre-amyloid oligomers and impairs fibril growth, this results - in combination with cellular clearance mechanisms - in a reduction of the amount of deposited amyloid fibrils. Importantly, anle138b is not a “fibril breaker”. This is essential, as fibril fragmentation could enhance prion-like propagation and disease progression by generating more particles capable of recruiting monomers by templated misfolding.